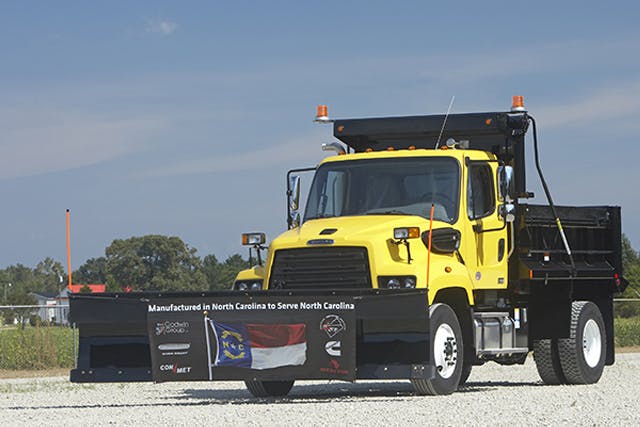 "Mother Nature is no match for this Freightliner 114SD snow plow. Not only is it crucial for a snow plow to be equipped with a properly angled plow to clear the roadways, safety for the driver also plays a huge role. These drivers venture onto the roads when everyone else stays off of them. This Freightliner 114SD plow not only powers through snow, but also ice. It powers through it like a battering ram." — Pat Godwin, The Godwin Group

Central North Carolina native Pat Godwin is an example of what hard work and persistence can lead to in America. Godwin grew up on a farm with humble beginnings and worked in his backyard with a borrowed welder to get his repair shop off the ground. With hard work, dedication and a genuine attitude, Godwin succeeded in growing his business, which became The Godwin Group.

Headquartered in Dunn, N.C., The Godwin Group and its affiliated companies comprise the largest family-owned and -operated truck body manufacturer in the United States.

A veteran of the industry for 43 years, Godwin understands the importance of delivering a reliable product. The Godwin Group primarily focuses on municipal and special project accounts, producing dump trucks and snow plows. Their largest account is the North Carolina Department of Transportation (NC DOT). And approximately 90 percent of truck bodies sold to the NC DOT are produced by The Godwin Group.

The Freightliner 114SD snow plow provides Godwin's customers with extended vocational options as it takes toughness to the snow and ice-filled highways and back roads. This severe duty and versatile snow plow truck is built with tough components and a chassis engineered for ease of upfit. The 114SD severe duty platform is ready to perform the most demanding jobs with industry-specific features such as front frame extensions, optional air intake snow shield, incredible visibility and extreme climate thermal cab insulation.

“Snow plows take a huge beating while navigating the roads. They are susceptible to potential damage from manhole covers and curbs hidden by the snow, as well as corrosion caused by salt. The Freightliner 114SD stands the test of time in these conditions. “The design of the Freightliner 114SD receives incredible feedback from its operators, and that's what makes it such a success,” says Godwin. “Freightliner knows that to be a dependable truck, you've got to deliver the best product on the market, and with the 114SD, that is what you get. This plow clears the icy, snowy roads so society is able to get back to their everyday lives in a timely and safe manner.”