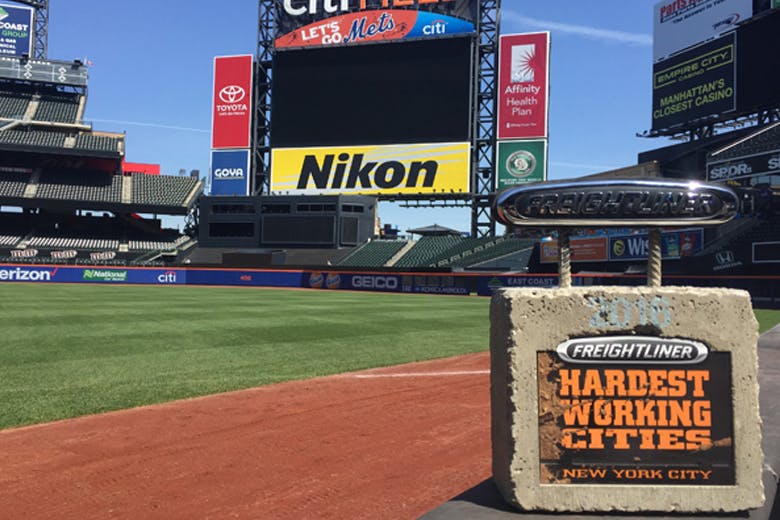 Freightliner Trucks honored New York City as one of the 2016 Hardest Working Cities on April 21st. A special event was held at Citi Field’s Jackie Robinson Rotunda to present the award to city officials. Mark Jaffe, president and CEO of the Greater NY Chamber of Commerce, spoke at the event.

New York City was selected after an extensive review of 400 metropolitan areas in North America, evaluating the cities in 11 different data categories. The city that never sleeps is the number one leader in North America for construction employment, contribution to gross domestic product, and in number of transportation establishments.

New York City is also among the top three cities in North America for manufacturing employment, which makes up about 76,000 jobs. There are currently hundreds of residential projects in progress throughout the city in one of the biggest building booms of this generation.

Looking past all of the facts and figures, the heart of the Freightliner Trucks Hardest Working Cities program is the people who make up those statistics. It takes more than trucks to build cities, and that’s why Freightliner makes surprise job site visits to personally thank the people responsible for this tremendous growth.

In New York City, Freightliner visited two Big Reuse centers in Queens and Brooklyn to thank workers by delivering coffee and doughnuts. Big Reuse is a nonprofit operating retail outlet for used building materials, including lumber, cabinets, appliances, furniture, lights, plumbing fixtures and doors. The materials are recycled from buildings being demolished or remodeled, as well as from film sets and building suppliers, and sold at discounts to keep them out of landfills.

New to the Hardest Working Cities program this year is Behind the Hard Hat, a blog that features stories from the people we meet on our 2016 tour. At each city, we’ll be getting down and dirty to find out why hard work matters and what motivates people to rise and meet their daily challenges.

One of the people we met in New York City was Otis Kelsey. Here’s a look at his story:

“I was born in Queens and then I moved to Harlem for a couple of years, then I moved to the Bronx, and now I live in Jersey. I’m mostly motivated by survival. I like to wake up bright and early, hear the birds chirping while I get ready for work. I can’t stay in the house all the time. I always have to move, and this job keeps me moving. I take care of the warehouse and basically am the big helper around here. That’s what I like to do most: help people out. For example, I drive the fork lift, help interns, run the register, and help Paul [the assistant director of operations]. This warehouse is huge and there’s always work to do. I’m never bored.”

Visit Behind the Hard Hat to uncover more stories about the people of New York City, Edmonton, and Seattle-Tacoma.