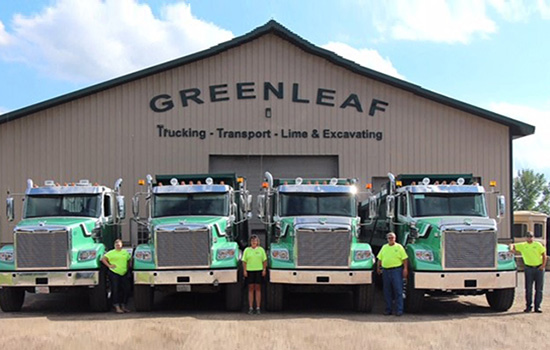 "We’re delighted with the 122SD. The Detroit DD16 engine and the 18-speed transmission are a luxury to drive." — Eric Lofgren, Greenleaf Trucking.

Eric Lofgren started Greenleaf Trucking 30 years ago, and over the years the Taylor, Wisc., company has built a reputation for dependability, handling everything from hauling gravel to plowing snow to making long-haul deliveries across the lower 48 United States. It is a well-earned reputation: Greenleaf is still doing business delivering asphalt for one of the very first customers it started doing business with in 1985.

“We’ve been hauling predominantly asphalt to Mathy Construction for 30 years and we’ve worked hard to build our relationship. They count on our trucks to keep their product moving,” Lofgren says. “You have to be dependable and have reliable equipment when you are moving asphalt. You have to count on your equipment. If it is always breaking down, you are not going to get called back by the customer the next day.”

The fleet at Greenleaf Trucking includes 11 gravel trucks and 30 long-haul trucks. The star vocational truck at Greenleaf is the Freightliner® 122SD.

“We’re delighted with the 122SD. The Detroit® DD16® engine and the 18-speed transmission are a luxury to drive,” Lofgren says. “It’s comfortable and roomy. The creature comforts are outstanding. The cab has the room needed to mount the power tower. The chassis handles tremendously on the road and it is very stable on work sites. And Freightliner, with the Detroit® engine, has got it really going on. It’s powerful and the fuel mileage is good.”

Greenleaf Trucking is a family affair. Lofgren partnered with his brother to start the business before buying him out in 1992, and in the early days his parents were involved. Now his wife, Kim, and son Brandon “Bubba” Lofgren drive for the company, while daughter Brittany works in the office. Both of his children are finishing up college degrees, and Bubba plans to take over the family business one day.

Most of Greenleaf’s gravel hauling jobs take place within a 100-mile radius of Taylor. After holding off on new truck purchases during 2012 and 2013 because of a slowing economy, Greenleaf started to refresh its fleet in 2014.

“It feels good to put new equipment in service,” says Lofgren. When buying new work trucks he focuses on driver comfort and reliability, while configuring the truck for maximum hauling capacity to get the best payback and reduce the Real Cost of Ownership℠.

The Freightliner 122SD offers four cab configurations: Day Cab, Mid Roof, Mid Roof XT and Raised Roof. Engine packages on the 122SD include the Detroit® DD16®, Detroit® DD15®, Detroit® DD13® and Cummins ISX15, creating 350 to 600 horsepower. The 1,900-square-inch radiator can cool engines up to 600 horsepower and 2,050 pound-feet of torque with loads up to 160,000 pounds. The driver-friendly roomy cab has an ergonomic wraparound dash.

Having a reliable dealer for quick access to parts and service is important to Greenleaf. Lofgren credits a long-term relationship with River States Truck and Trailer and salesperson Tom “Fuzzy” Krajewski with helping the company to have the right trucks to get the job done.

Greenleaf is also a Freightliner customer when it comes to its on-highway trucks. “Freightliner really did their homework when they came up with the Cascadia. It’s a rock star with the Detroit DD15 engine,” Lofgren says. Several of Greenleaf’s original Cascadias have hit the one-million-mile mark and are still going strong. Last year the company added four new Freightliner Cascadia Evolutions to its fleet.

“Eric is a self-made man who honors hard work, honesty and commitment to excellence,” said Joe Laux, owner of River States Truck and Trailer. “His company has grown, creating great high-paying jobs for employees as well as giving back to the community.”